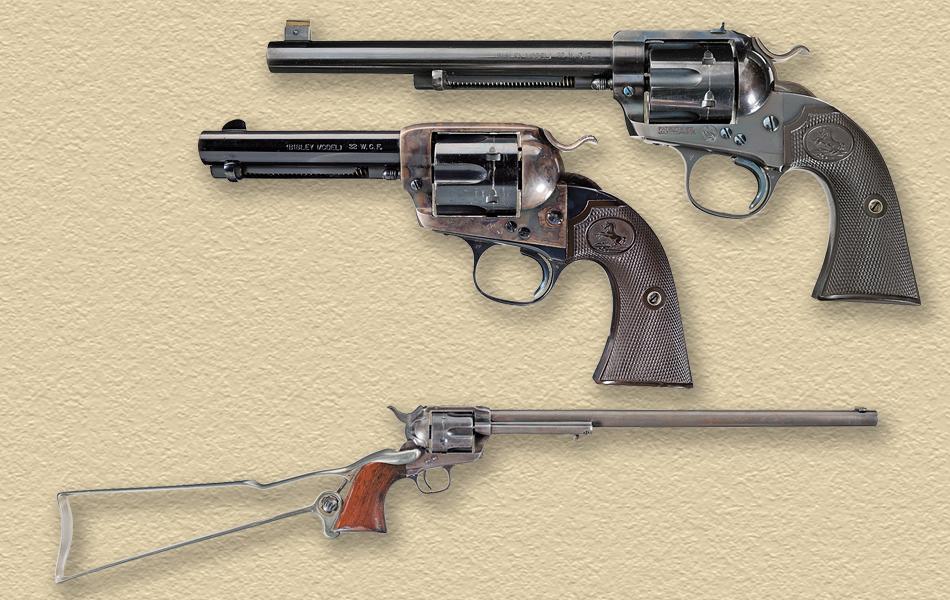 I would recommend Gordon's video even if I was not in it.

Although Sturm-Ruger was not in business until the 1940s they have become a premier six-gun maker.  Their very reasonably priced revolvers are well known for their reasonable pricing, accuracy, reliability, and durability making them a favorite with Cowboy Action Shooters.   Ruger's "old" and New Vaquero revolvers have become especially popular.  You can see several upgrades over the original Peacemaker design. 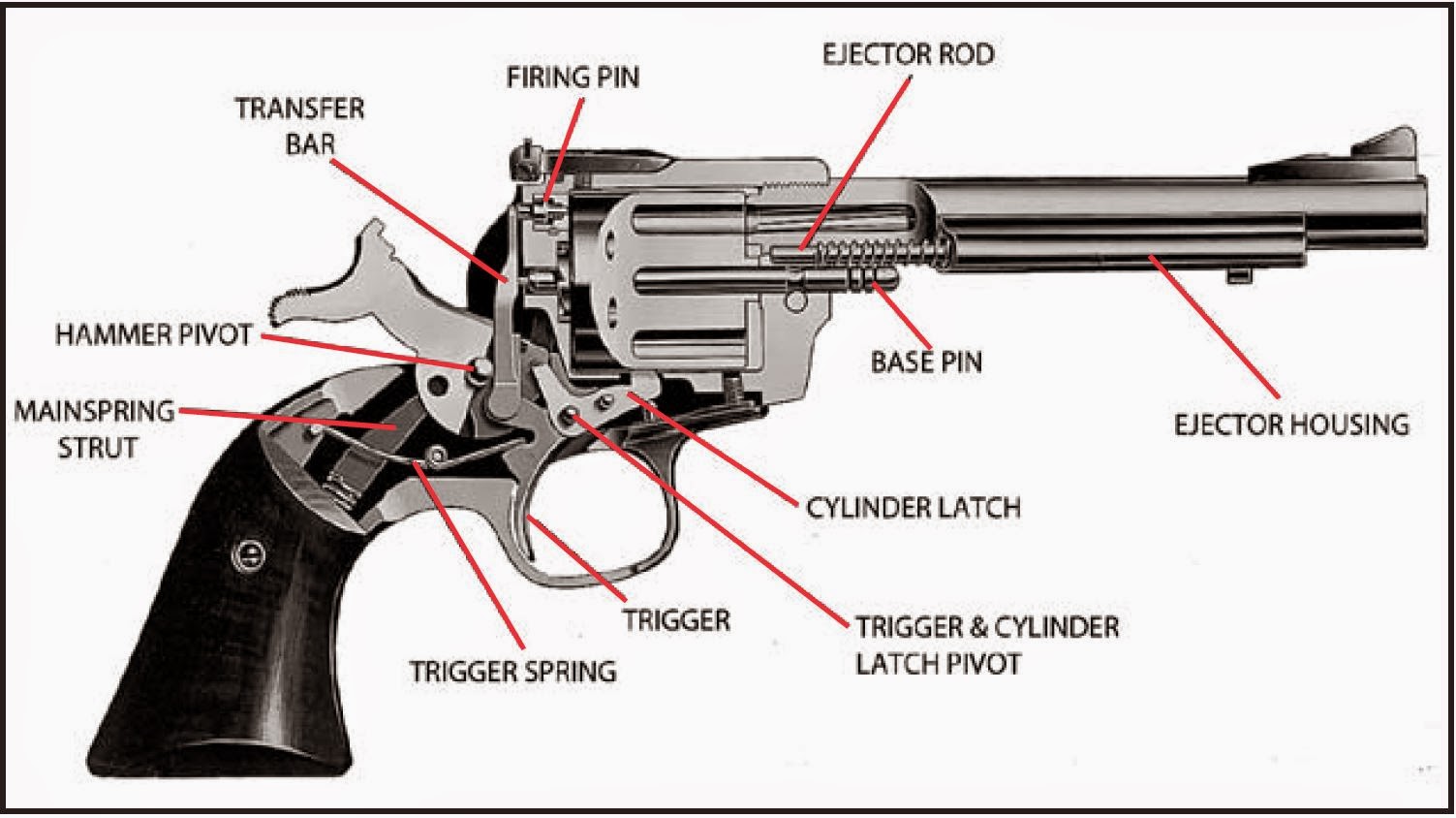 When post war production of metallic cartridges began to meet public demand there were still tens of thousands of cap&ball revolvers being carried.  Several gunsmiths and even major manufacturers offered conversion services for these revolvers at pretty fair prices compared to a new pistol. Some old cap&ball inventory was converted before sale.  These conversions tended to be less expensive, fired smaller cartridges like .38 S&W, were very accurate, and felt nice in the shooter's hand.

PinFire metallic cartridges were invented in 1830 then patented in 1835 making them the earliest successful metallic firearms cartridge system. There is actually a pin sticking out of the cartridge side which is struck by the hammer.  Notice that the hammer trikes the top of the cylinder where the pin projects rather than the back as in centerfire of rimfire firearms.

The obvious disadvantage to a pinfire is that the ammunition was carried loose in a bag which could be bumped potentially causing some very loud and bloody excitement.  Since pinfire technology was primarily European and not seen nearly as much in the Americas it did not enjoy the practical innovations of gunleathers which might have shielded the protruding pins for accidental ignition.

The upsides to pinfire technology was that ammunition became available for revolvers, breechloading rifles, and shotguns.   Most pinfire weapons were semi-custom manufactured in a sort of standardized cottage industry based mainly in Belgium and France but also throughout Germany and Spain among other tertiary countries.  These resulted in some beautiful, innovative, and very steamy firearms that became rarer after Eli Whitney's introduction of mass production.  Pinfire ammunition can be produced in extreme sizes from 2mm to over 15mm. 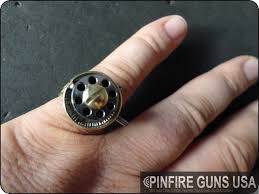 These watch fob 2mm pistols are still in production.

Winchester, and other lever action repeating firearms, evolved from the Volcanic. Some information on the rifle used by Chuck Connors in "The Rifleman", based on my own observations:  The rifle fired 12 shots.  (Count them in the opening sequence.)  I don't know if that's possible with bullet tipped cartridges.  Probably only with blanks.  The rifle had the large cocking lever loop so it could be cocked by swinging it around.  There was a long screw threaded through the cocking lever that would press the trigger as the lever was closed so the rifle would fire with lever closure.  It was stated in at least one episode that the rifle was chambered for .44-40 ammunition; the same round as used in many six-guns.

I have seen the screw through the trigger guard trick so that the rifle fires every time that you close the lever but somewhere I recall that Connors claimed that he never saw such a modification or needed it.  I suppose that I would say that too.  ;-)

This is one of our local shooters: https://www.youtube.com/watch?v=-NJ5UNJLIn8  I have seen him fire all 10 rounds from his (modified) 1973 Winchester before the first empty brass hit the ground so well under 2 seconds.

I am aware that some of my fellow SASS shooters have added "short stroke kits" to their Winchesters.  This speeds them up by requiring less motion to cock.  Some kits become very picky about cartridge lengths and even allow shorter cartridges so I suppose that you might be able to squeeze another round or two in with some such modification.  SASS only allows 10 rounds so I am having trouble remembering how many .45LC my '92 Rossi Puma will hold and don't forget the one in the chamber.  14+1 maybe? 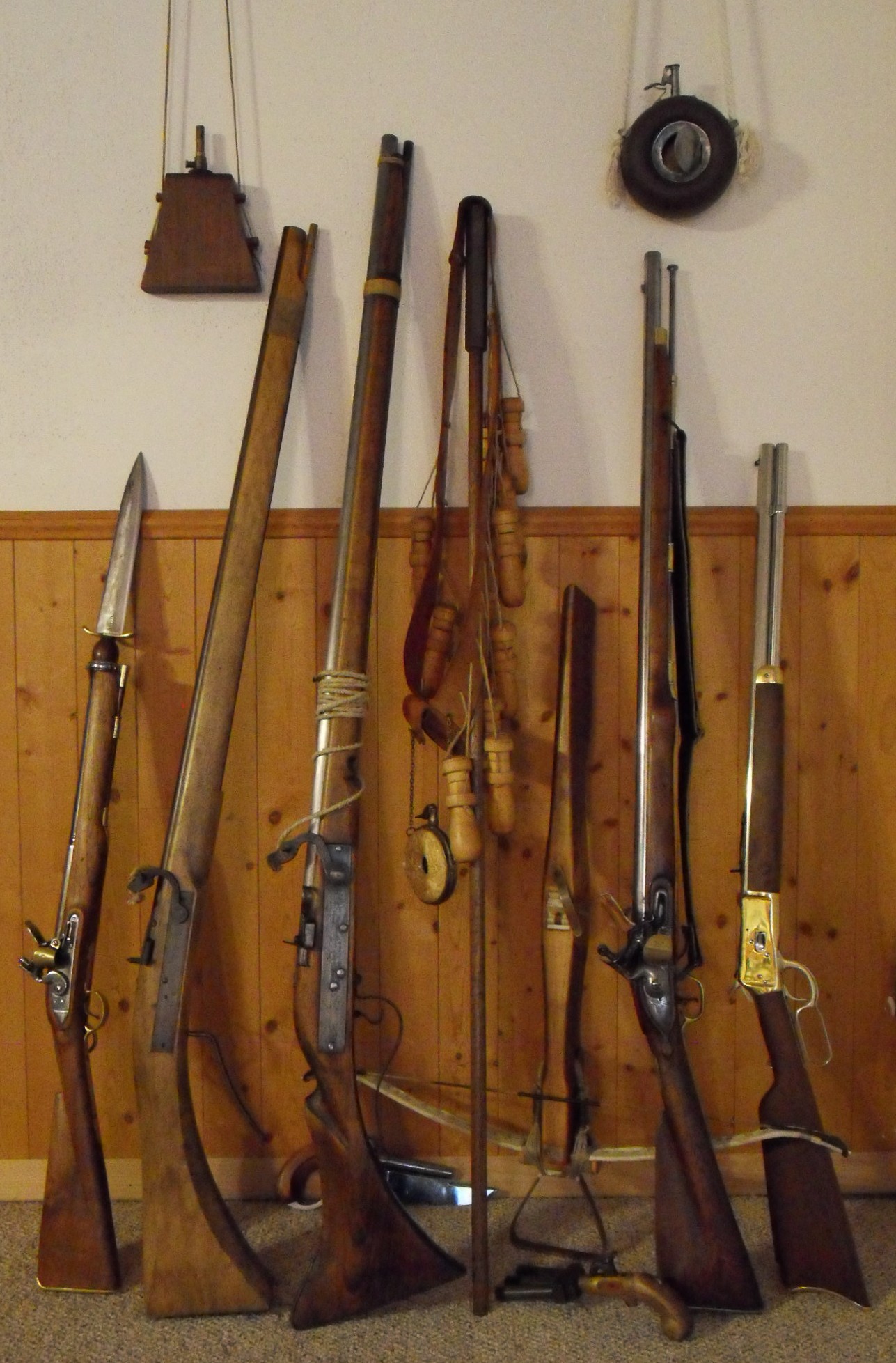 OK, I was only surmising about the magazine capacity, but I'm certain I saw an episode where Connors was adjusting the screw and locknut.  It was probably added, or removed, depending on whatever a given plot called for.

Nice longarm collection, BTW.  I have no idea what the item in the center is, though.  Or what kinds of handguns those are on the floor.

Now I have to rewatch the shows to see the screw/nut.  An actor fibbing; you are crushing my trust in humanity.  ;-)

The center is a "hand gonne" like this newer .75 calibre one:  https://www.youtube.com/watch?v=AAmnGTAqH8I&index=12&list=U...  Basically a 14th century pipe-on-a-stick-of-doom.  Silly pointless and fun to own.  Found a young fellow in IL turning them for about $100.-125. 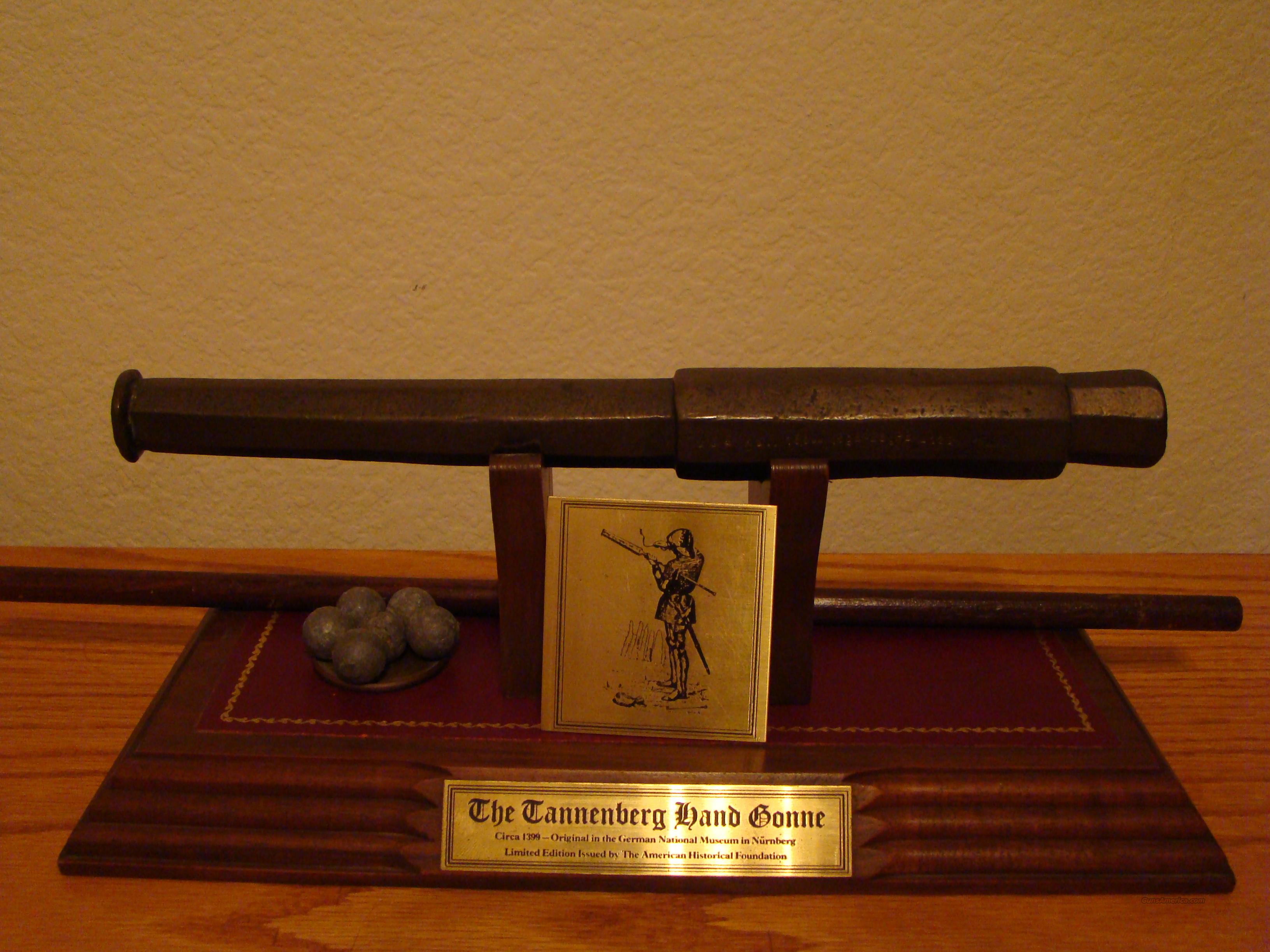 The hangy stuff are "apostles" and powder flasks for the matchlocks. I missed part of your question.  The pistols are a couple of the old Classic Arms kits like:  https://www.dixiegunworks.com/index/page/category/category_id/327/c... 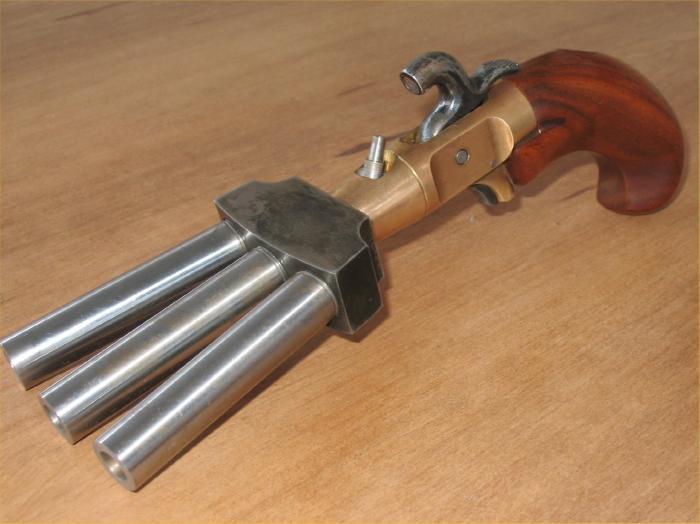 In the way-back-before-days I used to sell these out of my shop.  These kits take a little more gunsmithing skill than most buyers thought so several were returned to me.  I was OK with refunding their money since I am much better at finishing someone's messed up project than starting a project of my own for some reason.  I have most of their line except the pepperbox.

Rumor is that Classic Arms is either out of business or soon to depart the mortal coil so if you have any interest in these very steamy little kits grab them while you can.  They make wonderful SP and theatre props.

The Spencer was the first real military repeating rifle.  With almost a quarter million manufactured and firing a fairly powerful .56-56 round they were widely used.  Their downsides included rim-fire ammunition (hard to reload) and the hammer needing to be cocked separately from using the lever to eject/chamber rounds.

Despite the US Army's resistance to using Spencer rifles they proved VERY effective especially at the Battle of Chickamauga where they have been compared to modern attack helicopters compared to the conventionally armed Confederate units.

In and around the 19th century everyone owned a shotgun.  These ranged from single barreled muzzle loading flintlock "fowlers," double barreled caplock muzzle loaders, external hammer aka rabbit ear cartridge shotguns, hammerless, Winchester lever actions, and even early (but dynamic) pump shotguns.  Shotguns could load such a variety of cheap ammunition that they were suited to small game, fowl, big game, sport, and personal defense. 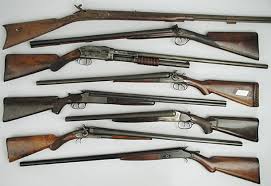 History of the Shotgun 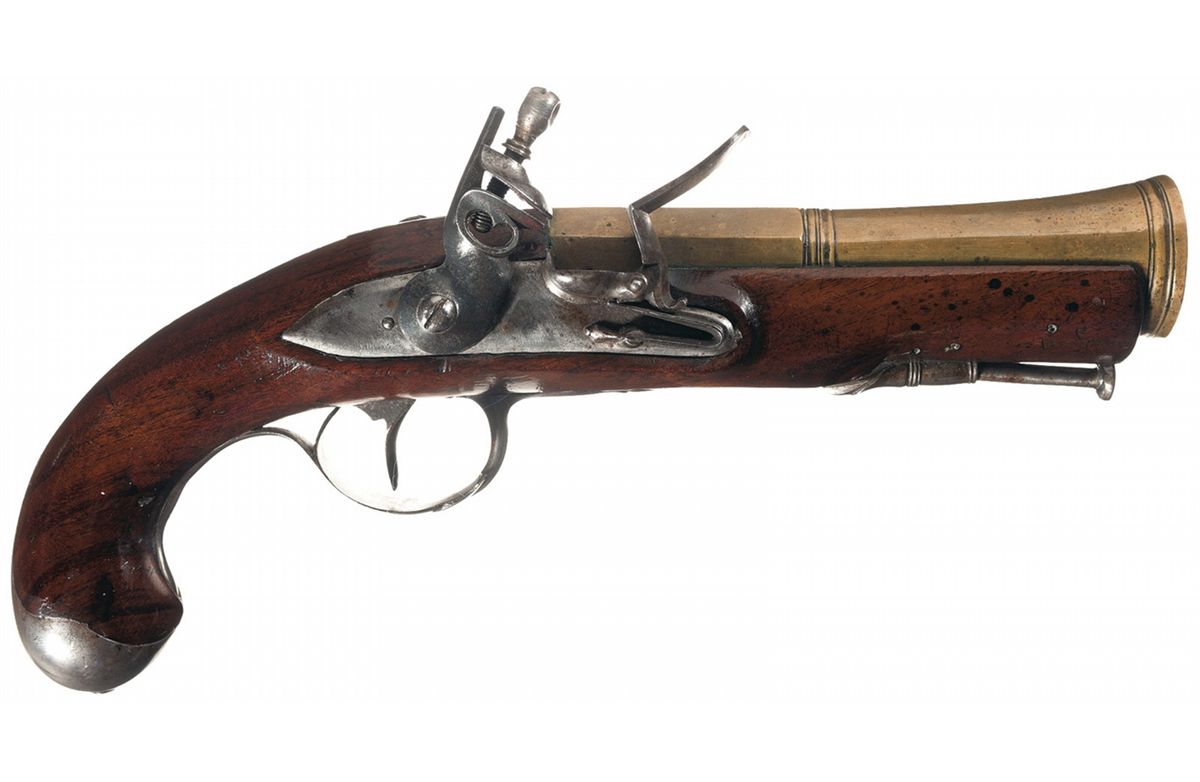