Hi, Can anyone help?

I am doing a small SteamPunk art project and am searching for period-correct images of sliding canopies e.g. like a fighter aircraft. However to have historical integrity it must be period-correct (i.e. NO post-1920 offerings), i.e. pre-1920.

I vaguely recall some years ago seeing a picture of such a feature applied to a motorcycle sidecar but I can no longer remember where. Maybe someone knows of it? However, don't get fixated on motorcycles or even just transportation. Similar contraptions resemble, for instance, glass bell-jars, terrariums, museum display cases, etc.

They may derive not only from pictures but perhaps also, science (fiction) magazines, period art/design concepts and particularly interesting: patents from the time. Just to demonstrate that this is not as far-fetched as you might think, have a look at the invention of streamling(!) - the ALFA 'Ricotti': 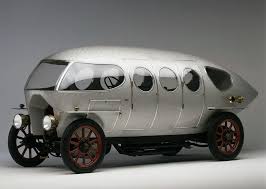 Send me your image attachments - all relevant are welcome!

Thanks for your reply. Unfortunately you've mis-understood my post. The images I require must be period-correct, i.e. pre-1920 not latter-day 'pastiches' otherwise there is no historical integrity.

Sorry, bro. I understood your post. You didn't understand the time period.

Pre-1920 aircraft had open canopies, no sliding/sealing types. Thus the wiki link for you to research.

i included the cycle images as they look "correct" to the period as one can get. Meant to be used as design inspiration. Up to you to mix those type designs to a WWI type canopy.

Btw, I work at a military historical museum. We just had a fairly large WWI display to commemorate the 100 year anniversary of the armistice. Any images that showed an old style sliding canopy would have caught our attention.

Hi C.H., not sure where this is going but I'm not trying to duplicate a WW1 fighter, it is after all, an art project. You keep referring to fighters visa-vie open canopies. I think you mean open cockpits. However, if you do refer to a CANOPY, then you may be interested to know that the real SE5 fighter of WW1 entered service with cockpit glazing - pilots didn't like it, so had the service fitters remove it. I think you need to talk to your museum director and have him advance funds to acquire a few more SE5 pics for the archives. My original post made made it clear that all sources of imagery were of interest, not just aircraft so long as they were genuinely pre-1920. Hope it clarifies.

Understand that you are looking to a Steampunk art project using pre1920s COCKPIT styling, but utilizing a kind of sliding CANOPY look.

The second sidecar image looks like the best bet to adapt to an early aviation style. Rivets and struts would be correct vs the later period molded canopies.

As to the Se5, I would enjoy seeing an image showing a full CANOPY, but my quick research doesn't pull up anything like that.

"Everyone was suspicious of the large "greenhouse" windscreens fitted to the first production models. These were designed to protect the pilot in his unusually high seating position, which was in turn intended to improve vision over the upper wing. The squadron did not fly its first patrol with the S.E.5 until 22 April,[11] by which time, on the insistence of Major Blomfield, 56 squadron's commanding officer,[12] all aircraft had been fitted with small rectangular screens of conventional design. "

The accompanying image shows a larger, wrap-around windscreen around the front of the cockpit. Mayhap a harbinger of later full canopies. But in no way to be confused with a full canopy in its production.

Another source for visual styling, you might review what equipment was used in The League of Extraordinary Gentlemen. Back of my mind, seems some of Nemo's toys may have had something. Been a while since I last watched. The source comics may have even more, that I wouldn't know

Just to resolve any ambiguity that may have been in my reply regarding the SE5, the cockpit had glazing i.e. a glorified, transparent wind deflector but not a full, enclosed over-head canopy whether sliding or swing-over. In terms of aviation, bear in mind that airships of the period did have glazed, enclosed cabins but so far I've found no images showing an individual cupola style. But of course, that's only aviation......