While attempts at radio-like transmissions began in the 1830 Guglielmo Marconi successfully transmitted and received what would come to be called radio in 1894.

The above picture is a type of crystal radio two-way transceiver that acted like a cell phone.

I did manage to acquire a 'classic' cat's whisker device, and an assortment of both mounted, and unmounted mineral samples.  They're all handmade.  In fact, the seller told me that he sent me the one that he was, at that time, using himself since he didn't want to make me wait until he'd constructed another.  I don't think I've retained his website, or email info.  Nope.  Can't find it.  I also have a specially constructed matching transformer (an autotransformer, I think), that offers a high impedance that will not load down the detector, and allow for using modern low impedance audio transducers, or even an 8 ohm speaker.  Like my radio sets, all this is still in storage.

Ahhh...  Things have become a bit hazy where radio (or even video) transmitting is concerned.  (I should point out that I am a licensed Radio Amateur, so I do know a bit about this.)  There are slices of spectrum where low power transmitting (but no more than one watt, five watts is for the old Citizen's Band) is allowed without a license.  If one has an Amateur license, more power is allowed in the internationally allocated bands, but "broadcasting" (that is, transmissions not directed to another specific station) is still prohibited.  It's a somewhat gray area though, especially since one way transmissions "of general interest" to other radio amateurs are specifically allowed.  This explains things like W1AW's daily code practice, and 'bulletin' transmissions, as well as 'programs' like The Amateur Radio Newsline.

There are also things like low power 'community' radio stations on the FM band, but these still require an FCC license.

And of course, there's still good old fashioned Pirate Radio.  I used to have a great time seeking out, and listening to, pirates.  In fact, if the old traditions still hold, now would be a great time to look for them.  Christmas, and New Year's Eves were when pirates were most active in the 1990s, and first decade of this century.  Mainly somewhere between 6.9 and 7.5 megacycles.  Although there was a trend of moving to SSB, instead of AM, meaning a more advanced receiver was necessary.

OK, I think this is more than enough to confuse anyone without a background in radio and electronics.

I like where you are going with this; SteamPunk Pirate Radio.  Broadcasting from a drone composite airship with virtually no radar signature......  Of course while politicians are on a decriminalizing kick a few letters might take the teeth out of more FCC regulations.

Most low power, unlicensed transmitting in the United States is governed by Part 15 of the FCC's rules.  In extremely broad terms, one can transmit on a number of frequency bands, as long as power does not exceed 100 milliwatts, and no interference is caused to licensed operations.  Examples include things like in home wireless (not cellular) telephones, as well as radio controlled cars, boats, and flying machines.  There used to be both kit, and assembled transmitters that worked in the AM, or FM broadcast bands, but the places I remember offering them, like Radio Shack, and Ramsey, are basically gone now.

OK, it looks like a number of devices are still available from CanaKit

I found these easily, so there are probably other vendors as well.  There are also other options, like the "Lowfer" band (160 kHz - 190 kHz) which allows power up to one watt, but only a 50 foot antenna length, which is terribly short for such low frequencies.  But these frequencies aren't found on most most multiband receivers.  (I do still have a working general coverage receiver, and a VLF converter, so I have this band covered.  And this gear is with me, not stored away.)

The antenna (and its transmission line) is a critical part of any transmitting system.  If you can't transfer power to the antenna efficiently, or get the antenna to electromagnetically radiate that power, you'll never get a signal out beyond a few hundred feet.  That's why international short wave broadcasters devoted acres of land, and literally miles of wire to their antenna systems.  This (as well as transmitters with as much as two million watts output) is how they got strong signals that could be heard all over the globe, even on old, or inexpensive receivers.  As for receiving antennas, lots of elevated wire, and a good ground are still the simplest solution for pretty much everything below 30 megacycles.  Although, I have gotten good results by just clipping a lead to a metal window frame.  This at least allows for signals from the outside of a building to reach the receiver.  Just be sure that the clip is connected to bare metal.

Woof.  Now I need another rest.

Yes, Tesla had already patented a number of basic, essential elements of radio, including both the series, and parallel resonant (tuned) circuits.  I believe that his radio controlled boat is the item appearing in the upper right corner of the Tesla Company promotional image.  The item below it is his bladeless turbine.  The item in the lower left is his polyphase induction motor, but I can't place what's in the upper left.  The central images are one of the photos taken during his experiments in Colorado Springs (the background), and the foreground is an artist's rendering of the wireless energy transmission tower he was trying to develop on Long Island, based on those experiments.

Here is a photo of that tower.  The building is where the electrical energy to power the system was generated.  The tower was demolished in 1917, but the powerhouse still stands.

(Sorry, but I can't get the image to fit.  If it looks cut off, you can see the whole thing by opening it separately.) 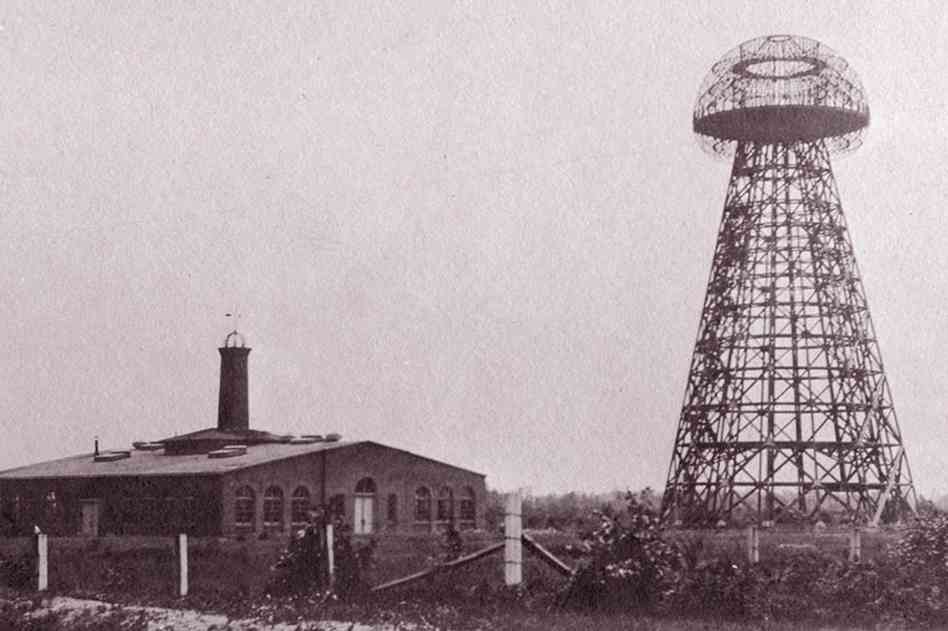 Marconi is better remembered because of his (successful) attempts to turn radio into a profitable enterprise, while Tesla was satisfied to develop, and patent his ideas, then leave the rest to others, while he moved into other areas.