Since it is seasonally appropriate, I am going to post the CR&A Christmas Special for 1905.  It is really meant to be read after finishing Chapter 23, so I'm going to fill in a little information so anyone reading will have some idea of who the characters are, and what's going on.  The rest will probably come across as mysterious, but that could be a good thing, since it may make readers curious about CR&A, more of their story, and the universe they live in.  Chapter 23 concerns CR&A's journey to, and activities in The Self-Propelled Seatropolis of Sylothia (a mysterious, and secretive nation, highly advanced in the areas of science and technology, whose original inhabitants existed at the same time as the civilizations of Atlantis, Lemuria-Mu, and Murania), and some of the people and events mentioned refer to that.

Formalities first.  The contents of this, and all previous and succeeding blog entries posted by me; stories and events, characters, fictional settings and places, original material of any kind, &c. are the sole property of the poster.  Unless noted, any unoriginal material is, to the best of my knowledge, in the public domain.

Now some background.  The following section is taken from the start of Chapter 23, and briefly describes the members of Calloway, Regnad, & Associates:

[P. (Paul) ALOYSIUS REGNAD]:
Regnad 55 years old, but most people say he looks at least ten years younger.  He has blue-gray eyes, and wears glasses because of his nearsightedness.  His hair is dark brown, and long enough that he keeps it tied back in a ponytail.  He is 5' 11" tall, clean shaven, and weighs around 165 pounds.  [Note: This character that shares my name is based on me to the point that he basically IS me, except that he lives in a more interesting universe.]

[MARIE]:
Marie is a biological creation and an alchemic chimera, but she looks like an ordinary human.  She was created by Doctor Thomas Conroy.  (Not the name he was born with, but the one he was using at the time of his death when he was something over 260 years of age!)  Marie is about 5 feet 3 inches tall, with bobbed black hair and violet eyes.  She has never said exactly when she was created, but evidence points to her being at least 50 years old, though she appears only a year, or so, older than Adele.  Creations apparently age very slowly, if at all.  When Marie was created she was given the imperatives of loyalty and obedience.  Due to Dr. Conroy's genius and foresight, she was able to transfer her allegiance to Adele and Regnad upon his death.  They understand the purpose and nature of the imperatives, but do not agree with them.  They are trying to help Marie to overcome them and cast them aside, but that may never be entirely possible.

[CAROLINE IOLANTHE SPRAGUE]:
Caroline is 34 years old.  She is 5 feet, 7 inches tall and weighs about 135 pounds.  She has nearly waist length shiny, chestnut colored hair, but she always wears it up, usually in a loose bun.  She has dark brown eyes and needs glasses for reading.  She is actually Dr. Conroy's daughter, but she never met him.  Caroline uses the surname of Sprague since this was the name her mother was using in the years leading up to her death.

[ADELE AMARYLLIS CALLOWAY]:
Adele has straight hair that is dark red in color.  It is about 3 inches below the shoulder in length.  Sometimes she ties it back, or up under her hat.  When she dresses formally she will wear it either up or down as the occasion, or her mood, calls for.  Her eyes are an unusual pale green color.  Her complection is light and freckled.  She is only 5 feet, 1 inch tall and cannot possibly weigh more than 104 pounds.  She is 23 years old but is often mistaken for a teenager.  Adele is surprisingly strong for her size, and has an acrobatic agility that would be the envy of any professional gymnast.
[ Note on dialect: Adele grew up on a farm in southeast Texas.  She later assisted her father when he would do part time work as a ranch hand.  She speaks in a mixture of an educated southern drawl acquired from her mother, a native of western Georgia, and a western twang littered with bad grammar and slang that she's she picked up from her Texan father, and various ranch workers. ]

[SABEETHA]:
Sabeetha is also a creation of Dr. Conroy and an alchemic chimera.  She is quite obviously part snake.  Specifically part spitting cobra, and also rattlesnake.  She has yellow eyes with vertical pupils, and nictitating membranes.  She has a long, forked tongue.  She also possesses a "Jacobson's Organ".  Snakes use this organ to sense prey, sticking their tongue out to gather 'scents' and other particles from the atmosphere, and touching it to the opening of the organ when the tongue is retracted.  She hisses when she speaks.  She has retractable fangs.  Her skin is white, but with a faint yellow tinge.  Her hair is thick, but not coarse, and bright yellow, as though it were exposed to nitric acid fumes.  It is very long, and she keeps it tied in a single braid.  Her fingernails are more like claws, and the same nitric acid yellow.  She possesses  NO imperatives.  She is Dr. Conroy's ultimate creation, and has yet to reach her first awakening anniversary.

Further information can be found in some documents created by a shadowy United States government group known only as "The Agency".  I am including them below. 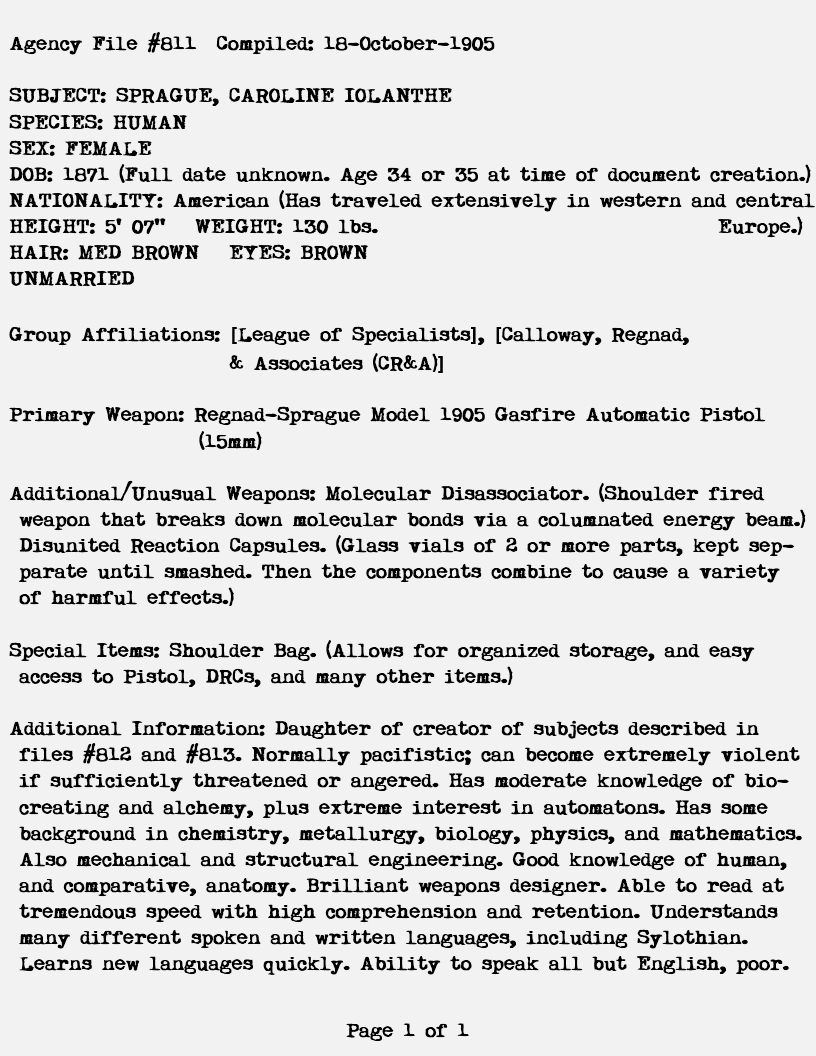 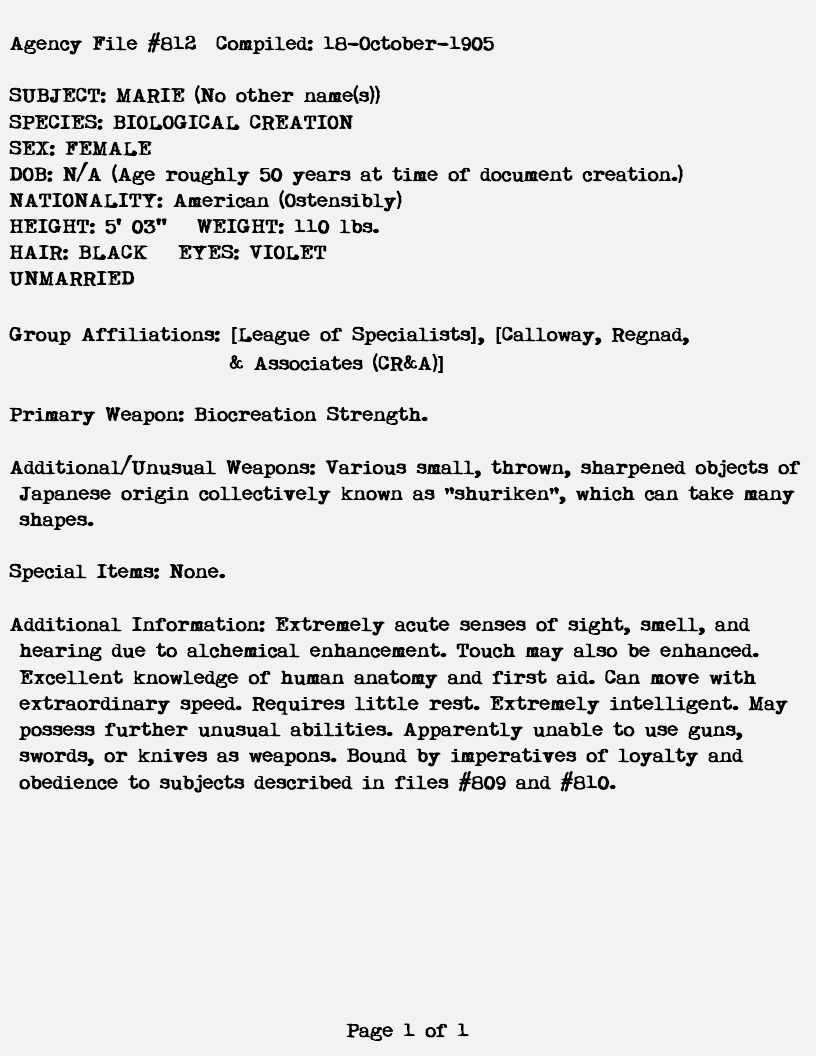 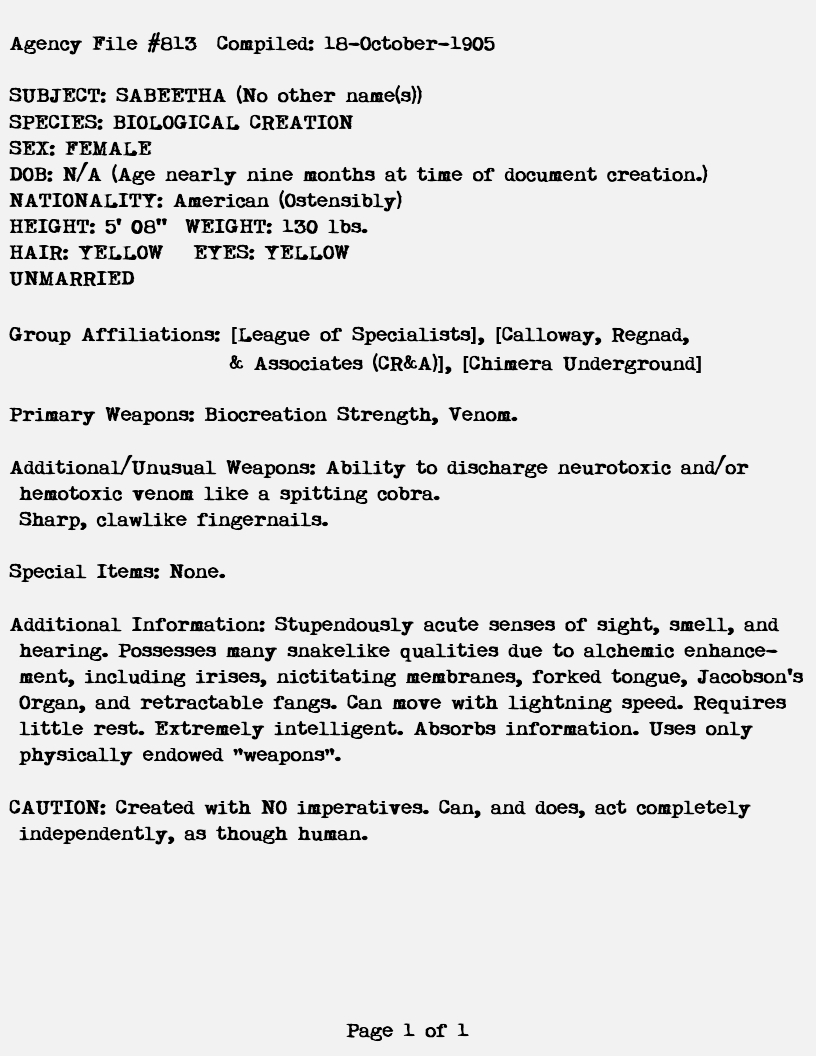 The story is set in CR&A's roverhome (a self-propelled dwelling on wheels meant to travel over the growing network of Johnson Roads, or any road or ground capable of supporting it).  Here is the basic floorplan: 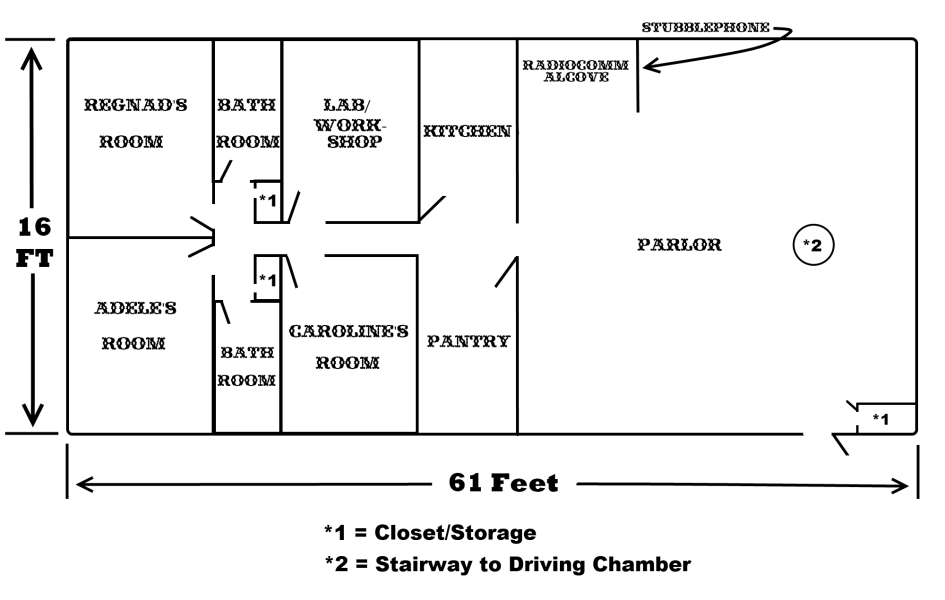 And that should do it.  The story, itself, will be in the following post.  It is written in what I refer to as my "script format", so be forewarned.