-      Machines used to play music are nothing new.  Carillons have been automated since at least the 17th century, and small music boxes have been around since at least the 18th.  By the 19th century, musical machines of many types began to be produced.  One of the most famous was the Panharmonicon, invented by Johann Nepomuk Maelzel.  He's often credited with also inventing the metronome, but it's likely that his metronomes were based on pre-existing devices.  Maelzel did build a factory to produce metronomes in large numbers.

The Panharmonicon is significant in the context of this group because Ludwig van Beethoven composed the piece "Wellington's Victory" specifically for this mechanical orchestra.  Many people seem to think "Wellington's Victory" is Beethoven's worst work.  Beethoven himself called it "program music of the worst kind", but he also answered contemporary critics by saying something along the lines of his being able to, ah, poop out better music than they could ever dream up.  Personally, I rather like the piece, and it was apparently popular when it was introduced.

Self playing organs, pianos, music boxes like the Polyphon, which used removable discs to play different tunes, as well as the Panharmonicon's descendants, the band organ and the orchestrion, were all developed during the 19th century.  There were also some musical automata, such as Maelzel's trumpeter. 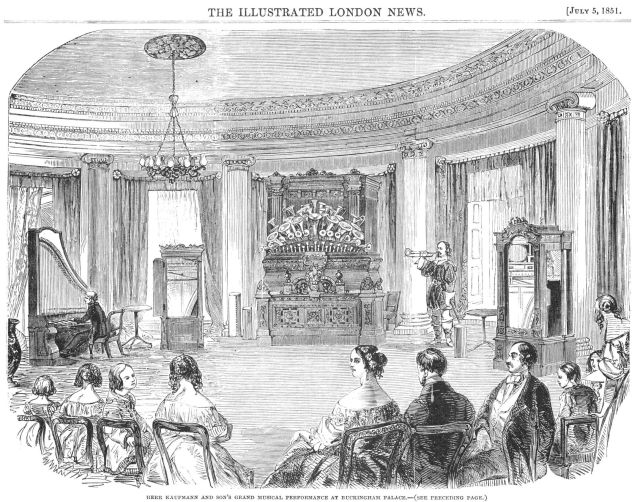 (This is an illustration of various musical machines being demonstrated at Buckingham Palace in July of 1851.  I believe the standing figure is Maelzel's trumpeter.)

In a steampunk setting, I'd think that musical machines would be well known, if not downright common, and a lot of what they would play would be arrangements of classical music.  In fact, some of what we call classical music today was still being written, and so would be 'new releases' at the time, and later would become part of the existing catalog of available selections.  Marches, and eventually ragtime (which some, like myself, now consider to be as much of a musical form as a concerto), would also be popular.

And in steampunk, we can always imagine bigger, better, and more versatile musical machines than ever actually existed.  For example, my CR&A (Calloway, Regnad, & Associates) universe features a company called 'North American Mechano-Music' which produces everything from small music boxes to their 'Grand Orchestrion' which includes both a piano and an organ, as well as string, brass, woodwind, and percussion instruments.  They are controlled by rolls of punched paper, like an autopiano, and they can be synchronized with other machines, musical or otherwise.

I've always been a fan of musical machines, and more information on these devices, either historical, or steampunk, is welcome. -

OK, I'm sure I had found a site that had all sorts of information on automata, including other pictures of Maelzel's trumpeter, but I can't find the bookmark, or manage to rediscover it.  But I seem to remember that the trumpeter still exists in a museum in Germany somewhere.  Also, several panharmonicons (three, I think) were constructed, one of which toured the United States for several years.  As far as I can tell, none still survive.  I'm thinking the last one was destroyed by bombs during WWII, like the bones of Spinosaurus Egypticus, but I could be wrong.  (When my memory, or intuition, do fail, they tend to fail spectacularly.)

Yeah...  I'm actually remembering some of the trail that led me to that site.  Research on a "Steam Man" like the one in the story.  I clearly remember a reference to one that was actually built, but had to be suspended by ropes, or cables, to 'walk'.  No one was impressed.

Still working on it, and encountering some dead links.  Maybe the page is gone?  I have had that happen before.  Wouldn't it be wonderful if some insanely rich person would create mirrors of such historically valuable websites?  I think so!

Well, lots of information about Johnny Brainerd, Frank Reade, and Frank Reade, Jr. but otherwise, no dice!  I guess I'll give up.  Yeah, I'm done.    For now.