Faro is a game of chance played with our "normal" 52 card deck, in what is now called "poker" size. (In the days of the Wild West, they were just as likely to be called a Faro Deck.)  Faro requires a "layout" that looks like this: The cards are usually spades, but can be any suit, and can be arranged slightly differently.

There is also (usually) an abacus-like device called the case keeper to keep track of which cards have been played. 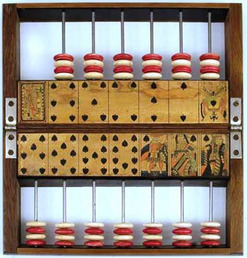 There are generally three people employed to run a faro game.  The dealer, the person who works the case keeper, and a lookout, who makes sure no one tries anything shady, like shifting their bets.

To play, the dealer shuffles the cards, and then places them face up, or in a box specifically built for this purpose, on the table.

The top card is called Soda, and is not in play, so it gets noted on the case keeper.  Now bets are placed.  Money (or chips) are positioned on the card the player believes will be the winner.  Bets can also be placed on the losing card by putting a penny, or copper washer on the bet.  This is known as "coppering".  When all bets are down, the dealer slides off the top card.  The next card shown is the loser.  That card is slid off, and the following card is the winner.  At this point, bets on the winning and losing cards are paid off (at 1:1), or collected.  In the event that both the losing, and winning card are the same, it is called a split, and the "bank" takes half of all bets on that card.  This is the most obvious advantage that the bank has.  This continues until there are three cards left in the deck.

When there are only three cards left, it is time to Call (or bet) the Turn!  This means players will predict the order of the last three cards.  If they are correct, they are paid off at four to one.  (The actual odds are five to one, so this is also a bit of a bank advantage.)  If two of the remaining cards are the same, the payoff is at one to one.  (The same as an ordinary bet.)

If, during the game, any bet is placed on a "dead" denomination (all of those values have been exposed), it can be claimed by the first person to notice it, including the persons running the game.

By all accounts, this was a fast paced, and very exciting game.  It is not played in modern casinos because the bank (house) advantage is too small.  In fact, there are true cases where operators of faro games committed suicide after losing everything they had!  I'll also point out that Wyatt Earp operated a faro bank during his time in Tombstone.