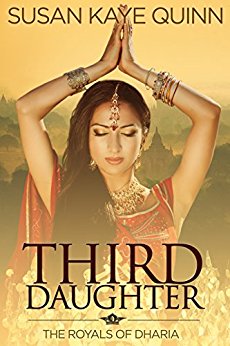 This past summer, I read a book so incredible that I don't know where to start, so I'll just put the wedge in somewhere and start prying.  I recently purchased one of those Kindle bundles where you get a dozen or so books for 99c.  This one was Gears & Goggles: A Steampunk Collection.  Right up my alley, so to speak.
The Third Daughter was the first book in the collection, and one I never would have reached for had it been alone on its sales page; I'm sure there's a lesson there somewhere.  Its author, Susan Kaye Quinn promotes it as a Bollywood-style romance, and it may be.  I know very little about the romance genre beyond the fact that it doesn't interest me a jot, but I think the author may have done herself a grave disservice by placing it in this category.
The story takes place on one of those not-Earth fantasy worlds so common in the genre, and it is centered around the Kingdom, or more accurately, Queendom of Dharia.  Everything in the land works on steampunk/clockpunk tropes, and fits beautifully into the genre we all know and love.  The land is ruled by a widowed queen who has three daughters.  The elder two have been forced into arranged marriages to seal alliances, and the third daughter, Aniri, is nearing her 18th birthday.  She is a tomboy, more interested in climbing and fencing than jewelry and silks, and has been stealing away unobserved (so she thinks) to meet a lover, a courtesan from a foreign embassy.  Their relationship has remained non-sexual up to this point, and Aniri believes, rightly or wrongly, that they will wed, and enter into a life of travel and adventure that only the independently wealthy can imagine.  She has no courtly duties beyond looking pretty during state functions, and very few cares.  Life extends before her like a huge blank canvas.
Until the fateful evening when her mother's personal guard, Janak, interrupts her supposedly secret dalliance to summon her before the queen without delay.  Her mother informs her that she will be introduced to a barbarian prince from the northern provinces in the morning, and it is hoped that her wedding to him will avert a war that would kill thousands.
Aniri, as you might imagine, is devastated, then confused when, instead of an ape in bearskins, she is introduced to a charming and handsome young man who seems to sincerely want peace, and needs this wedding to solidify his hold on the throne before his warmongering generals usurp power.  What's a princess to do?
At the first opportunity to get her alone, her mother explains that the foreign custom is for the prospective queen to live in the prince's palace for a month of courtship where they get to know each other, and establish how their arranged marriage will function.  The queen is in possession of troubling rumors of a flying ship that can wreak destruction on Dharia in the hands of the prince's kingdom, and her real mission is to confirm or dispell these rumors, and if true, discover some weak point that can be exploited to defend the kingdom.
Aniri journeys to Prince Malik's palace to face hostile factions, assassins, and creep around behind this seemingly sincere man's back to try to ferret out the truth behind the rumors.  None of this is aided by a message from her lover, telling her that everything the prince says is a lie, and the dreaded war will be triggered by their wedding.
There is indeed a classic love triangle in play here, but that isn't the book.  If you like court intrigue, political maneuvering, and steampunk gear aplenty, this could be the book for you.  It was certainly a pleasant surprise for me, and I am certain that this will join the Drizzt Do'Urden and Tarl Cabot of Gor series as Books I'll Never Forget.  I've been active in the world of steampunk for a good many years now, and I haven't come across Ms. Quinn's name as one of the giants of the genre.  It should be.  The Third Daughter stands head and shoulders above much of the material I've read.  Romance?  Yeah, it's there, and it's handled in an effective and satisfying manner, but don't be fooled.  This is the steampunk book for every reader, and the best thing is, it's the first book of a trilogy.
Available on Amazon right here.

Looking forward to read this story.