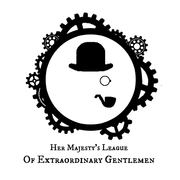 In the Year of Our Lord 2148, Queen Anastasia IV, may she rest in peace, established a firm hold on the regions outside the Solar Sector. These savage lands and systems are now under the protection of the greater British Commonwealth, and form the Outer Circle. The Outer Circle spans regions as close as Alpha Centauri to AD Leonis. Through the force of steel and brass these regions are patrolled, yet sometimes even the vast strength of the British Army cannot patrol the darker parts of the Commonwealth; Places where the sanctity of life is not recognized, where the sovereignty of Queen Araminta I is not acknowledged, and where evil and skullduggery run rampant. And for this reason, this quest, Queen Araminta I established the League. The League of Extraordinary Gentlemen, a Group of renowned  Scholars, Armsmen, Alchemists, Majjycians, and Experts to protect what the army cannot. They are specialized in their purpose, to Serve and Protect. They will use their skills to save the Empire.

This RP will follow the adventures of the League assigned to the Alpha sector, that farthest from the reaches of the empire, which makes it the least protected, and the one with the loosest morals.

See the thread for details on the universe.

A place for OOC discussion and general camaraderie.Continue

Here, details involving the technology and society of the universe, ship schematics, and general knowledge will be kept for future reference.Continue

You need to be a member of League of Extraordinary Gentlemen to add comments!