"Huzzah Adventurers! This group is for the telling of your adventures in steampunk or otherwise, fictional or truth. The fish story is always entertaining, even if the length of the fish is stretched. I shall begin.

Moving from Facebook, back to WTS to get a real online life.

Since March of 2013, when I had originally became a member of WTS, I have made several associations and friends in the steampunk community both actual and online. I have been able to do this through…Continue

We have a pond at camp that we call the lake. It's not a lake, it's a pond. But, as a Jewish summer camp, we have ironically mirrored the concept of calling small bodies of water by bigger…Continue

Then a huffing, puffing plop ( a summer camp tale of the Berkshires)

I've always been afraid of the dark and not just as a kid but as an adult as well. But times come when you get sick of your irrational fears and face them for different reasons. My adventure…Continue

So many of you know that I lived in Israel for a year. Well, while I was living in Jerusalem, my flat building was about a ten minute walk away from the Church of the Holy Sepulchre (Jesus'…Continue

You need to be a member of "No kidding, there I was..." to add comments!

My Album of Trading Adventures for the Members perusal.

Darling Eddie, do keep regaling us with your adventures!

I have less "adventure" story worthy adventures these days, what with the working from home and the toddler antics(although I suppose those count? Sir Sqeakins is quite the little adventurer.....last night we voyaged to the exotic Senor Fox and the little Sir decided the best seat in the house was the triangle wedge ABOVE the booth and would settle for nothing less......attempting to reign supreme above all of us on his make shift throne....) and some of the patient conversations I have are....enlightening. Soon we shall be at more conventions, and I am sure there will be stories from there as well!

"No kidding" there I was, deep in the soupy, muddy nether regions of FT McCoy Wisconsin. I have been given assignment of Officer in charge a blank fire range for crew serves weapons, M2 50cal and 240B for a mission named Operation Cold Steel.

A week into the mission I had learned that a three wheeled bike had been taken from our barracks, it was unlocked, and had belonged to a special needs young adult who uses it to go to work.

The higher leadership was notified so we could fine what happened to it. Later that week I was pleased to learned one of my former Soldiers was assigned to this mission also, a Master Sergeant medic who I worked with in El Paso. He had came to my range as our medic. I was wanting to get a picture taken with him when my cadre was waving me not to do that.

When I inquired as to why? I had learned that it was this Master Sergeant who had taken the three wheeled bike from the barracks, from a special needs kid. A MASTER SERGEANT.

I'm not sure what he was thinking, he had said he thought the bike was unlocked because it was used for morale welfare relaxation.

This Soldier has since been disciplined and sent back to home station but now that has become a running joke. You cannot make up the shenanigans that have surfaced since this incident. 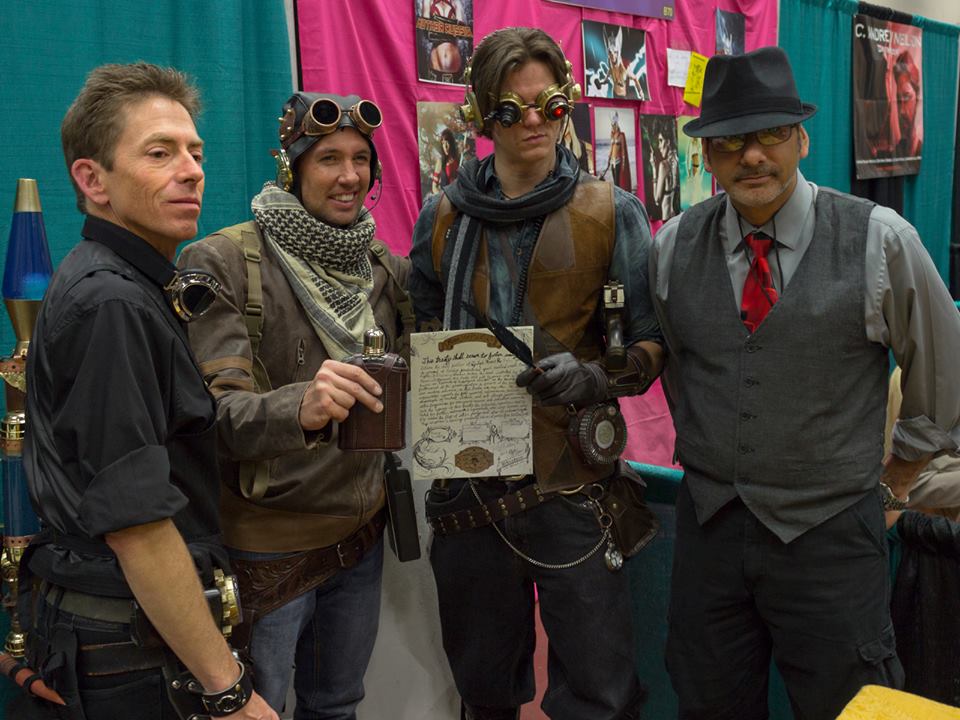 So no kidding there I was. In the midst of a science fiction convention in the Sun City. I was there as a vendor peddling my inferno devices of no small amount of destruction. There at this market place of discovery I was introduced to a number of adventurers of steampunkery in the Southwestern aether regions. We struck an accord quite quickly as these groups of people were not unfamiliar with how dangerous the Neverwhen world can be. Before departing, a treaty was drafted by a rather brilliant professor of the mysterious and dark arts. It was signed by all parties involved. The crew of the Airship Coyote's Fortune, the ban of paranormal investigators Threnody, and myself. The more I go down the rabbit hole the more connections I am making with like minded people.

Well, there I was...
Lying about, being dead,
with nothing better to do than to
stare unblinkingly up into the jungle canopy,
when it occurred to me
that being dead was not as bad as I thought it would be.
I felt my spirit leaving my body....no...wait...it was just gas,
and it was then I realized I was not, in fact dead,
just mostly dead which meant I was
Lying about being dead.

Bloody brilliant indeed! I believe I'll have a go at this...

LoL! That was bloody brilliant.