The crowd funding campaign for a Steampunk Animated short based on The Jupiter Chronicles, is now live! In light of this, here is today's character spotlight: 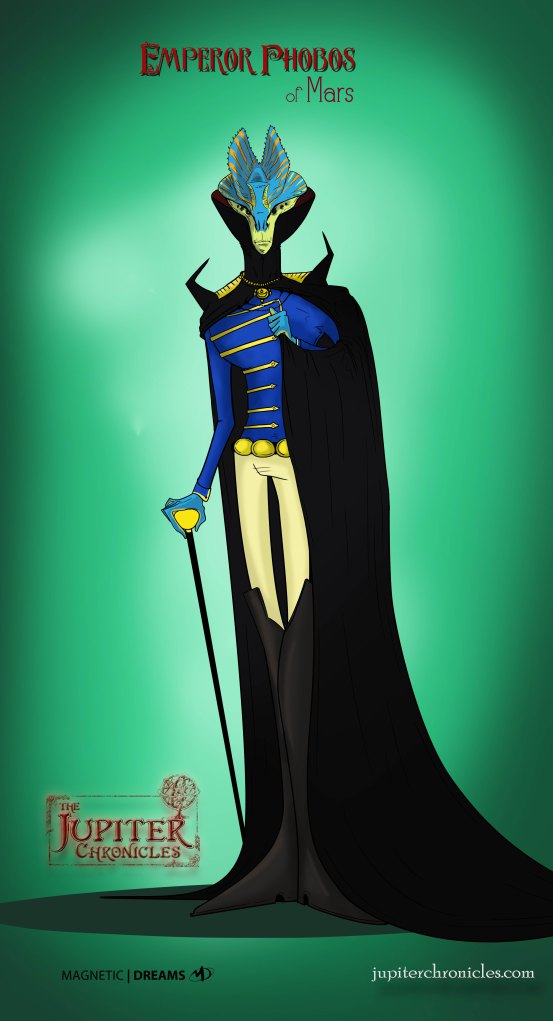 Phobos: Emperor Timor Phobos: Male, Martian, Height: 7’ Weight: 310 Description: Spitter Dino. Emperor of Mars who took control of the Jovians when their King went missing. Before the Martian War, Timor Phobos was a “Seer” and as “Lord Phobos” commanded the Skyrocket Predator. The Predator was given to him by the King of Jupiter as a sign of peace between both of their worlds: Jupiter and Mars. The lizard king of Mars who started the Martian War is a pawn of General Ardor. Phobos has his own agenda which is to bring down the Jovian race and convert them to the Bak’ra way of life. He sees them as a disgusting and arrogant species. Phobos hears from the Bak’ra while taking orders from Ardor. His grandfather, Tumulus is responsible for the subjugation of the Martian moons and their people. He claims to be the last descendant of Bak’ra who will bring about the great and final purge of unbelievers by enslaving those who defy him and freedom to those who believe. His brand of freedom comes with fear.

Click on the Kickstarter banner now (or http://bit.ly/SteampunkKickstarter) to learn more about the effort to produce an animated film short based on The Jupiter Chronicles.