A couple of years ago, shortly after I discovered Pinterest for myself, I started following someone who had these amazing pins on a board called "Steampunk." I was so curious about it because the pins were intricate, beautiful, spectacular...and I was quite drawn in. So, I went straight to her board to see what other visuals she was providing for inspiration. And I, then, became inspired by this thing called "Steampunk."

As I looked into it (because you all know I research when I find something new to take in), I found it was really from a sci-fi genre of literature, mostly based on the Victorian/Old West times, where the machines & beyond ran off of steam power. And, there are several of the storylines that lean toward a post-apocalyptic time of steam power. There have been movies with the same type of visuals, even TV shows & cartoons...
And I was hooked.

When I read something, I have an idea in my head, but it's true visuals that spark my imagination. I'm a visual learner. So, I started going thru other pins on Pinterest based on this, even Google images. The things I found were awe-inspiring, beautiful, crazy, intricate, and so creative in how those who have created their own characters took the genre to another level.

I could do that.

At some point, I came across some artwork. That's pretty wild, too. But there was one particular body of work from an artist that kept standing out to me. It was from the hand & mind of Brian Kesinger. Not only is he an artist, but he's even worked on Disney productions! I found that out later. But I really discovered him because of Victoria & Otto...along with his Tea Girls.

I was so taken with his lovely & precious idea of the companionship between the lady & her octopus (which has been made almost the Steampunk Mascot), and along with the lovely imaginings of the non-Victoria "Tea Girls", my mind began to swirl...the cogs were turning, and the steam machine of my brain was warming up & really got going!

More of the steampunk tie to tentacles have been to much of the cephalopod types, including the creatures of Cthulhu & the Kraken. Between all of these factors...my mind started trying to put things together.

I loved the tie to the octopus companionship, as shown by Brian, so I went with that. I also began looking at what it would take to start building a steampunk outfit. Holy Cannoli! The money that can go into some of this stuff is crazy!! I don't have that kind of money laying around to spend hundreds or thousands of dollars to put together something even just beginner. So I had to make the cogs of brain-workings work harder as I flipped the lever to deliver more steam to the thinking process...

As I tried to find pieces, I was working on a name & a backstory. Her name, T'luluh, is a form "Cthulhu" that I found intriguing. And, it's my own spelling. I'm sure most of you are shocked. Her last name, Poulpe', is French for "octopus". Then I wanted to keep it kind of classy, so I gave her the title of "Lady." So, I started to put together "Lady T'luluh Poulpe'" for the steampunk world.

Now, I don't remember exactly what order many of my pieces came into my possession, but if you remember, I had just enough things to do an early test run of my character. So, I unveiled a very rough first outing (although she looked quite put together) at our church's Trunk-or-Treat promotion table. But she was definitely still a work in progress. It wasn't the hair I wanted for her. She needed to be more tentacle-y...and so I really wanted a dreadlock 'do for her. Plus...she still needed a companion! An octopus...DUH! So, I began finding T'luluh a companion. I was looking for the right adoption, and it needed a perfect name...

As I started researching names for her new pet, I finally came across the name "Carlow." I was pretty drawn to it, then found out it's an Irish name (well, that's fitting) for "quadruple lake." It's totally a water name! Perfect! Well...if he's Irish, he needs a type of Irish last name...because we all know I'm giving him a last name. Amm-i-rite? Still along the lines of tentacles, and since T'luluh was the Cthulhu portion, he got the Kraken.
If you ever see the word "craic" (pronounced much like "crack"), it's Irish for "fun." So, Carlow's last name would be "McKcraic'n."

And then I did a mail-order adoption thru (the) Amazon. I found him! And he's adorable!

Plus, I found the perfect hair for T'luluh, I went to thrift stores & found the perfect skirt, I was gifted my jewelry & goggles, a halloween corset on clearance, gifted shoes, hand-me-over/down under skirt, thrifted blouse & over vest, and some clearance tights put together with the magic of modern safety pins. Oh! And the surge to get this all together when we found out we were going to Planet Comicon...on Pi Day!!  My entire outfit may have cost, including the adoption of Carlow, under $50. 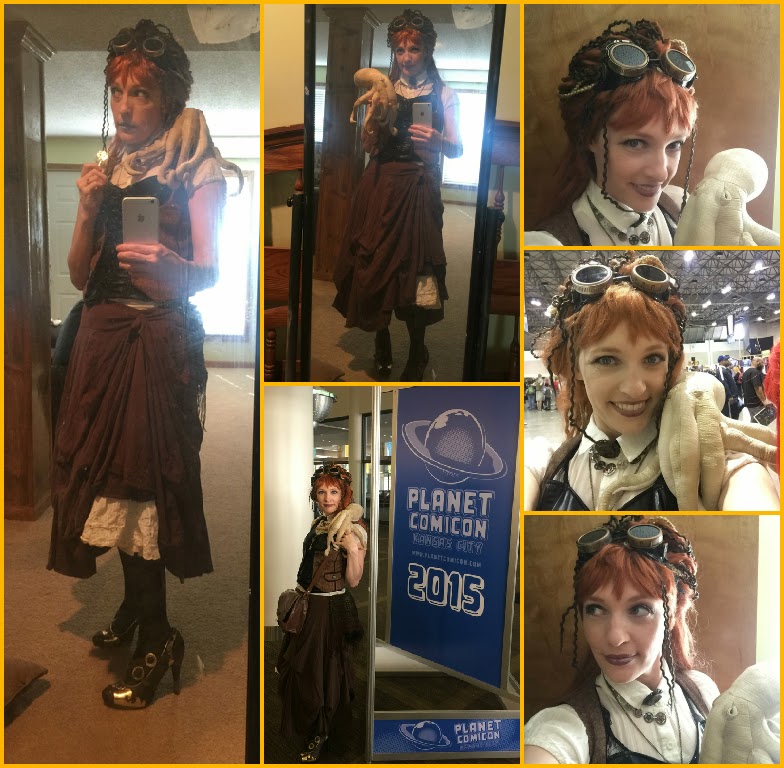 And I had to share that I put only one picture, at first, onto Instagram with a headshot of T'luluh & Carlow. I did tag it with #PlanetComicon. It was crazy that I got one of the artists with a booth there find it & say she saw me there & loved the outfit! WHAT?? I was so blown away. And then several other artists found it & liked it, too. So awesome! (I did add more pics on Instagram later.)
Of course I tagged Brian Kesinger in it...he's one of the biggest inspirations for the whole thing.

Even with all of that, T'luluh & her story are still a work in progress. I hope to do something with it in the future, but unsure how that looks at the moment. But when it involves continuing her father's work, how her mother passed, and the search for a sunken airship...and maybe even pirates...you know it's gotta be good!

Then, I hope to meet Brian Kesinger one of these days...well I hope T'luluh & Carlow get to meet him. He inspired their existence.

And I'm looking forward to another chance for T'luluh & Carlow to show up somewhere.

Also, glad to be here to start exploring T'luluh's story with Carlow.

In a slight shift, I think I am able to use my first run at T'luluh in a different way. As T'luluh looks so much like her mother, the early run at her will now be used as photographs of T'luluh's mother, Tavia.

Thank you! That's actually my plan coming soon. I've been looking through some so far. And I've already got extra ideas swirling.

Many of us have blogs where we write stories about our character either background origin pieces, one of my blog posts is a letter, some write about their character's adventures in the present (whatever part of the Victorian/Edwardian era they're in at the moment). Read some of our blog posts. Work on your own origin. Write about your character in any way you see fit.

Well thank you. Now you kind of see how my brain works. It snowballs quickly, that's for sure. So I can't wait to see where this takes me. Hold on for the ride, I guess...