I used to think these things had been around for ages, but it turns out that these lamps did not come into general use until the very last years of the 19th century.  (They were used primarily by miners, and cave explorers, as well as for bicycle, motorcycle, and early automobile headlamps.  In addition, they were marketed as home illumination to people who did not have access to electricity, or town gas.  By 1930, their heyday was pretty much over, due to advances in electric battery powered lamps.)  The reason they weren't used earlier is because the calcium carbide needed to fuel them was not easily manufactured until electricity became available in large quantities.  The first facility to produce it was built not far from the electrical generating plant at Niagara Falls, and the 'Carbide', in the name of the Union Carbide company, comes from this substance.

When ordinary water is added to calcium carbide, it creates a reaction that gives off flammable acetylene gas, which is burned to produce the lamp's bright white light.  They are a relatively simple device, designed so that water is dripped onto a reservoir of calcium carbide, and the acetylene gas is collected, and funneled up to a jet that burns it in front of a reflector.

'Vintage' carbide lamps have become something of collectors items, and can be purchased from various sources, but they have never stopped being produced.  They are still being manufactured today by J. K. Dey & Sons of India.  I'm not sure if they will ship to the United States, but two models of their lamps are imported, and offered for sale by HQ Company.  They also sell the required calcium carbide.  (At the time of this posting, they have no lamps in stock.)

A couple of months back, I found some in stock, and purchased a lamp of this type: 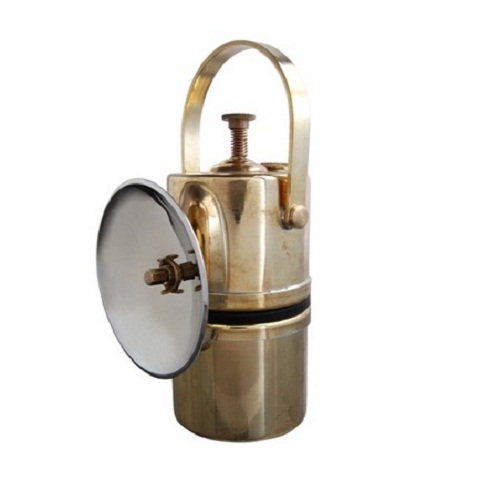 I've tested it and it works, but I'll also point out a number of things that anyone considering using a carbide lamp might wish to be aware of.

Firstly, they can not be just turned on and off.  Once water is added, it has to be continued until there is no more gas being given off.  Next, the residue in the carbide chamber is a smelly sludge of slaked lime that has to be cleaned out, and disposed of.  (It's not toxic, or anything, just yucky.)  There is also no way to control the brightness of the lamp aside from the rate of water dripping on the carbide.  How one deals with this depends on the design, and condition of the individual lamp.  Some lamps (like mine) can exhibit inconsistent pressure, which leads to varying intensity of illumination, as well as the potential for gas to leak back through the water chamber.  (Just annoying and wasteful.  There's a vent so it can't explode.  Oh, and be sure to get lamp grade, or miner's grade, calcium carbide.)  I should also point out that the reaction between the carbide and water is exothermic, so the carbide chamber can get very warm.  During testing, mine got a bit too hot to touch.  (Use your own judgement if you get one.)

All that being said, the lamp can produce a very bright white light that does its job well.  I think it makes a fun prop that could also be useful in the event of an extended power outage.

Foo, yah!  The price of carbide is up, too!  Makes me glad I decided to order the 10 pound quantity when I did!

Hey, it looks like the hand lamp, like mine, is back in stock at HQ Company, although it ain't cheap!  I'm pretty sure that I paid a good deal less 8 or 9 months back, when I bought mine.  (10 left in stock as I type this.)  Just pointing it out.

I've just discovered that "Colonel" Harland Sanders, of Kentucky Fried Chicken fame, once owned a company that manufactured carbide lamps.  Unfortunately, he started his enterprise around 1922 or 23, and was soon out of business because Delco developed electric lamps for automobiles, and rural electrification programs allowed electric lights to replace carbide lamps in homes.

I wonder if any of Sanders' lamps have survived anywhere?  If so, they would be "Colonel Carbide" lamps!   Heh.