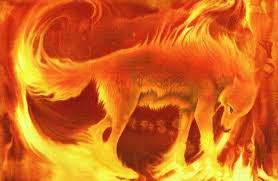 As Octavius regained consciousness, all he could feel was the cold ground on his face, the soft wind that tossed his hair, he could smell the earthen odor of the soft clay and also the acrid stench of smoke. His hearing came back suddenly upon smelling the horrid stink. The air was filled with the screams and cries of men, women and children.

He scrambled to his feet and made his way into his now ablaze village. Bodies were strewn all over, some mauled, some scorched and some beyond recognition of ever being human. Panicking he ran to his house and found it blazing. He kicked in the door and searched for his sword. Octavius only barely made it out his door before the roof caved in on his house. He ran towards to the Jarl's court and was taken back at the sight of a huge flaming wolf like creature standing right in the center of the courtyard. The Jarl's guards had circled around the wolf and were attempting to kill it but to no avail, it simply            swatted them away with its massive limbs. His father, protecting his mother and several villagers, took it upon himself and unsheathed his sword. "I'll slow the beast whilst you and the others get to safety" Octvius' mother cried out as his father charged forward, raising his sword. Octavius watched on as his father dodged the wolfs attacks and landed several sword strikes. Octavius cheered on his father as he fought the beast. Everything was going well until the wolf struck his father in the chest with a massive paw, knocked him over and pinned him down. Eyes widening in fear as he watched the wolf reach down and bite his fathers head and tear it from his shoulders.

My son, I have never been so proud in all my life. I watched as you grew into a man, a fighter, a hunter and a leader. I look forward to the day that I hand over my crown, sword and title to you, my son, heir to the Throne of Hibernia.

Octvius drew his sword and without thinking, charged out of pure rage and grief at the wolf, dodging its first attack, sliding under its legs and cutting it along its underside. The flaming hound howled in pain, sending blue flames rippling along its blazing body. It swung a hung limb at Octavius who tried to block but the sheer strength of the beast knocking him back. He collided with the courtyard wall and fell to the ground. The wolf vanishes and reappears on top of him. It howls and slashes across his chest, leaving deep gouges in his flesh. Crying out in pain and plunges his sword into the wolfs chest, piercing its heart. It rears back and howls with a deafening wail. As it falls, time begins to slow for Octavius, he can feel his life slipping away as his blood pours from his wounds. He looks around and sees his mother rushing to him, she gets about half way and then freezes in place, as does the entire courtyard. the only movement comes from the wolf that is looking at him and struggling to stay standing.

"You have bested me human filth. You have bested me! A hound of Helheim!. You're probably wondering why all this is happening to a puny being such as you, why you can hear me, why I attacked your village and why everything is frozen in place. I am Kvasht, first Helhound of Helheim. I was sent here to kill your father by Hel herself. She, doesnt like your diseased family line for some reason. Anyway, before I pass out of existence, I have a proposition for you human."

Octavius struggled to understand what was happening "But, I dont...what....how...."

"Its simple you pitiful excuse for a being" the Wolf spat. "Accept and you live, decline and you die" The last word echoing in his ears